This forum will feature our reviews of books and films that anyone interested in Operation Desert Storm will want to read and see.
Post Reply
1 post • Page 1 of 1 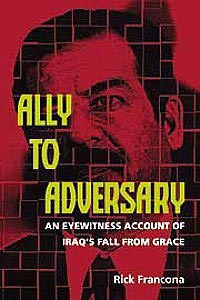 Ally to Adversary: An Eyewitness Account of Iraq’s Fall from Grace
by Rick Francona

This is an exclusive review and interview with Rick Francona, the author of Desert-Storm: Ally to Adversary, an eyewitness account of Iraq’s fall from grace.

Ally to Adversary – An Eyewitness Account of Iraq’s Fall From Grace tells the story of U.S. policy toward Iraq from the final year of the Iran-Iraq War through the end of the Persian Gulf War as seen through the eyes of a military officer intimately involved in the execution of that policy. In the late 1980’s, the U.S. Department of Defense entered a cooperative relationship with the Iraqi Ministry of Defense. Rick Francona was one of the officers tasked with going to Baghdad to work with the Iraqi armed forces. During the course of his duties, he was exposed to senior Iraqi military officers and operations. This unique insight into Iraqi military operations, including the use of missile and chemical weapons, was to shape his key role in the

U.S.-led Desert Storm coalition fighting Iraq three years later.
A fluent Arabic speaker with extensive experience in the Middle East, Francona was selected to serve as General “Stormin’ Norman” Schwarzkopf’s interpreter. In Ally to Adversary, he relates his experiences in dealing with the Saudis and other members of the coalition, culminating in the ceasefire talks with the Iraqis. It was at a dusty airfield in U.S.-occupied southern Iraq where he came face-to-face with his past dealings with the same Iraqi officers he had worked with three years earlier.

While Desert Storm was for many a war against a faceless enemy, for Rick Francona it was a war against friends and former colleagues.

~~Interview with the Author ~~
DS
How did you intially get involved in becoming an interpreter? Did you plan to do this while in school?

RF
When I enlisted in the Air Force in 1970, I was given a language aptitude test, and I scored well. I was offered the opportunity to become a linguist, with vague hints of Russian, Hungarian, Czech, etc, and embassy duty in Europe. However, at that time, almost all new linguists were trained in Vietnamese and sent to Southeast Asia, as was I. When the war ended in 1973, there was no need for the large number of Vietnamese linguists, so many of us were offered retraining in other languages. The choices were German, Arabic, or Hebrew. I thought Arabic would offer the greatest opportunity for travel to interesting places. This was before the October 1973 war and the oil embargo, so I did not realize what a great choice I had made. After that, Arabic speakers were always in demand.

DS
Seeing as there has been much written about Desert-Storm and the surrounding events and times, what makes your book diffrent from other such writings?

RF
My book is an eyewitness account of what happened to US-Iraq relations from 1988, to Iraq's invasion of Kuwait, and through Desert Storm. In 1988, I was in Iraq as part of the American government's effort to assist Iraq in its war with Iran. As the war between the two countries raged during the 1980's, U.S. intelligence assessed that the likely outcome of the war would be an Iranian victory. An Iranian victory over Iraq was unacceptable to the United States, as it would allow Iran to exert undue influence over the oil-rich Gulf Arab states, particularly Kuwait and Saudi Arabia.

After the decision was made to assist the Iraqis in a variety of ways, I was sent to Baghdad as part of the Department of Defense effort to work with the Iraqi armed forces. One of the officers I worked with was the deputy director of military intelligence. During Desert Storm, he became Saddam's director of military intelligence. So, in effect, I had a personal relationship with the enemy J-2.

During the Iran-Iraq War, I was able to observe several of the Iraqi battlefields, visit Iraqi headquarters units and field installations, and tour Iraqi front line positions and obstacle emplacements, the same type of obstacles and positions we were to face in Kuwait and southern Iraq during Desert Storm. I also was able to fly a few sorties with the Iraqi air force, visit some air bases, and got a feel for their capabilities.

Enduring Iranian SCUD attacks during the war of the cities was also an interesting experience. Just being in Baghdad was an experience, one that only a handful of American military officers had.

Soon after the Iranian acceptance of the United Nations resolution ending the war in August of 1988, the Iraqis made it clear we had nothing more to discuss, and my mission to Baghdad ended. Over the next two years, I watched with sadness as the relations between Iraq and the United States continued on a downward spiral. I felt a sense of dread at the vitriolic rhetoric aimed at Kuwait and Israel in the summer of 1990, and observed in disbelief the invasion of Kuwait.

Because of my time in Baghdad and personal acquaintance with many of the senior Iraqi officers we were now facing as enemies, I was selected to be general Schwarzkopf's interpreter. It was a unique vantage point to observe events.

When Desert Storm opened in January 1991 with the massive air attacks on Baghdad, I knew the military intelligence compound, where I had met with my Iraqi colleagues in 1988, was on the target list. The entire compound was virtually destroyed in a series of air and missile attacks. I understood the military decision, but also felt remorse at the certain loss of life among the Iraqi officers, colleagues I had come to know, like, and respect.

The author, Rick Francona, has done a great job in taking a complex issue such as Iraqi affairs and crafted it into an informative and enjoyable book.

Ally To Adversary is quite unique in the fact that it appeals to a variety of sectors of readers. It will appeal to experts in Middle East politics for its unique insights into the history behind the war. It will also appeal to veterans who can relate to the author`s experiences, and 'civilians', such as my self, will find it an informative resource to follow ongoing events, as well as a unique insight into the military world we rarely get to see.

I believe that this book is a must-read for anyone that is interested in the politcal status of the Middle East leading up to the Gulf War. It is a well-written chronicle which tells the story of Iraq/US relations from a true insiders perspective. In reading the book I was intrigued by the true "human" touch the author imparted unto the events.
Top
Post Reply
1 post • Page 1 of 1